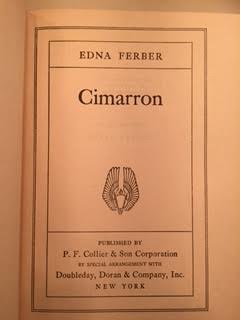 This is the third book in my six volume set of Edna Ferber novels (the first two are here and here). It is set in the old west (technically Oklahoma) which didn't interest me much at first, but it presented such an uncommon view of the western frontier (bold southern lawyer starts a newspaper in Indian territory) that I couldn't help but be intrigued. I love Edna Ferber's characters, and Yancey Cravat is somewhat unforgettable. His wife, Sabra, is arguably the protagonist, though she plays a lesser role. And thus I'm starting to see a pattern in Ferber's work. So Big was about a fish-out-of-water city woman raising a son among subsistence farmers. Show Boat was about a fish-out-of-water city woman trying to raise her daughter on a Show Boat. And Cimarron is about a fish-out-of-water city woman trying to raise her son and daughter on the frontier. Still, despite the pattern, Ferber's writing and situations are cutting and fresh. I found the reversals the most surprising, particularly regarding Native Americans. They are put upon and oppressed, but dealing with it at the start of the story, but when Oklahoma discovers oil, everything changes. The descriptions of Osage Native Americans who are suddenly millionaires are disturbing, but it is easy to imagine how it might have been just like that. Part of what makes this book interesting is that it spans the period from 1889 to probably 1925, approximately the same span we see in The Magnificent Ambersons, and the amount of change we see in America during that time is just as striking.

Part of what I liked was seeing the old West from Ferber's point of view. I particularly liked this passage:


He licked and stamped the envelope, rose, and took from the table beside him his broad leather belt with its pair of holstered six-shooters, evidently temporarily laid aside for comfort while writing. This he now strapped quickly about his waist with the same unconcern that another man would use in slipping into his coat. He merely was donning conventional street attire for the well-dressed man of the locality. He picked up his sheaf of envelopes and stepped out. In three minutes he was back, and affably ready to talk terms with them. It was, perhaps, this simple and sinister act, more than anything she had hitherto witnessed, that impressed Sabra with the utter lawlessness of this new land to which her husband had brought her.

I like how it calls out how easily monstrous habits can so easily become the norm for society. Is it really okay for ads for "Trojan Studded Bareskin" condoms to be on in the middle of the day during family programming? Is this normal now?

In any case, the novel moves fast, and it is hard not to be charmed by Yancey Cravat's boldness, fast-talking, adventure seeking, and literary aplomb. I could see the ending coming from a mile away. And it was so corny, I was about to lose some respect for Edna Ferber. And then, with the magic that only she can do, she had me in tears with the last two lines. Bravo again, Edna! I now cannot wait to read her next one. I wonder who her inheritors are, if there are any, today?