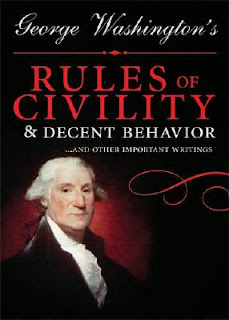 This book is a bit of a scam, actually. The 110 "Rules of Civility" that are presented were not authored by Washington, but are somewhat older, traced back to a text written by Jesuit scholars in the sixteenth century. The editors of this book suggest that Washington had to hand-copy these rules at some point in his education, and that they may have had some influence on him. I suppose in that sense we can say he "wrote" them, but it seems like a bit of a stretch. The rules are a mix of the timeless ("#40: Undertake not to teach your equal in the art himself professes; it savours of arrogancy.") and the archaic ("#57: In walking up and down in a house, only with one in company, if he be greater than yourself, at the first give him the right hand and stop not till he does and be not the first that turns, and when you do turn let it be with your face towards him."). But mostly it is advice that is still good advice today. Dramatically, the final rule is a real capper, "#110: Labor to keep alive in your breast that little spark of celestial fire called conscience."

In order to better connect this book to George Washington, the editors then tack on four of his recorded speeches. This includes some farewell addresses to the army, his inauguration speech, and his, uh, exauguration speech, or "address at the end of his presidency." Generally, these were somewhat dull and predictable. But the final speech had some notes about the nature of the Constitution and the dangers of party politics that were striking. Check this out, for example:


Let me ... warn you in the most solemn manner against the baneful effects of the spirit of party ... the common and continual mischief's of the spirit of party are sufficient to make it the interest and the duty of a wise people to discourage and restrain it.
It serves always to distract the public councils and enfeeble the public administration. It agitates the community with ill founded jealousies and false alarms, kindles the animosity of one part against another, foments occasionally riot and insurrection.

If there is a better description of what is happening in congress right now, I haven't seen it.  So, hey, congress! If you won't listen to the current president, at least listen to George Washington, will ya? Set aside your party nonsense for the good of the country. After all, it's the civil thing to do.
Posted by Jesse at 12:46 AM 1 comment: