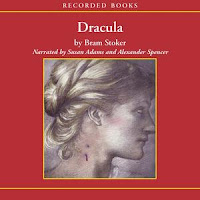 I read this recently, because I'm working on my own vampire story, and I figured I should go right to the source. I was AMAZED at how different it was than I had expected. It is one of those stories that everyone thinks they know, because they've seen so many tellings of it. But the original is not what I expected at all. Here's why:

1) The format. It is not told like a normal novel, at all. It is actually somewhat post-modern. The book is a collection of journal entries, phonograph transcripts, and clippings from magazines and newspapers, that all interlock to present an unusual story.

2) The book has an unexpected focus on technology. I would have expected it to be a gothic story, set in the past, but it was published in 1897, and it was startlingly up-to-date, with Kodak cameras, typewriters, personal phonographic recording systems, telegrams, and overnight trains across Europe all playing key roles in the story. America is discussed frequently. In a real sense, it is a story about old vs. new. This contrast makes Dracula more horrifying, and throws his ancient evil into sharp relief against the other characters in the story.

3) I had always figured the story was something like: "For some reason, travellers crossing Europe are waylaid, and have to stay at Dracula's castle, where a bunch of creepy things happen to them." In other words, the trope established by The Old Dark House. But that is not the story at all. The story is much more nuanced and complex. You see, Count Dracula has a problem. He's been eating people for hundreds of years, and all the locals know about it, but are unable to stop him. So, they all take a lot of care to stay away, and to ward him off. As a result, he has to work harder and harder to survive. Eventually, he hatches a plan. Abandon the castle, and move to London, where it is so crowded, and there are so many poor, that he can surely pick off someone every few weeks, and no one will know. So, he works to learn English, buys a bunch of travelogues about London, and sends for a London real estate agent to help him buy a house there. The whole thing is very logical, very real, very solid. And this is the real magic of the book, I think.

4) The characters are much more solid and real than I would have expected. I thought they would be caricatures, but they aren't, not really. They are all thinkers, all very logical. The book isn't afraid to get edgy. When Johnathan Harker tells the tale of the vampire girls trying to seduce him, his lust is palpable and undisguised, and would surely have been consummated if not for Dracula's interruption. Van Helsing is similarly interesting -- a true man of science, whose eyes and mind are wide open. He's not a superhero, but nor is he afraid to plunge into the unknown, and systematically deal with it.

In short -- this isn't the book I expected. Over 100 years after publication, it is has a vitality and a freshness that surprised me. And so... my plan. One day soon, I hope to start a Kickstarter: "The Dracula Box." This would be a new publishing of the original text, separated into diaries, newspaper cutouts, and phonographic recordings, to give a new kind of reality to the original text. I'll need to find independent bookbinders, people who have 1897-style handwriting, etc. I will do it, sometime... let me know if you are able to help.
Posted by Jesse at 11:51 AM 4 comments: 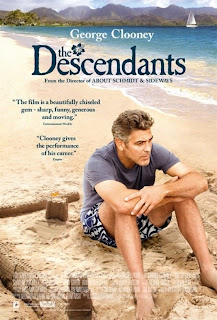 This movie was simple and interesting. It is mostly a showcase for character performances, but its use of symbolism is fascinating, too. On one level, Hawaii is clearly a metaphor for isolation, but at the same time, it's not just a backdrop. The realities of Hawaii's problems play an integral part in the story. I wonder, though -- what is it about George Clooney that makes him such a strong fit for mid-life crisis movies about isolation? (Hmm... I never wrote about Up In the Air -- I guess I better do that.) He, Tom Hanks, Robin Williams, and Tom Cruise have something in common this way -- they are each typecast into specific emotional roles that are a little hard to define.
Posted by Jesse at 11:20 AM 1 comment: