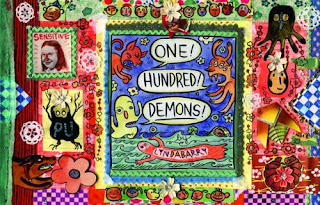 I am a huge fan of Lynda Barry's What It Is, and I found this very pleasing as well. It's her usual collection of "crummy things that happened when I was a kid," which she always manages to tell so poignantly. She does such a wonderful job of merging together all the things she is good at -- drawing, painting, storytelling, and inspiring, that it makes me a bit jealous. And her handwriting is magical. Sometimes, I think, like Leo Lionni's Frederick the Mouse, I'm saving up my stories until they are ready.
Posted by Jesse at 3:50 PM No comments:

Tales from the Tao 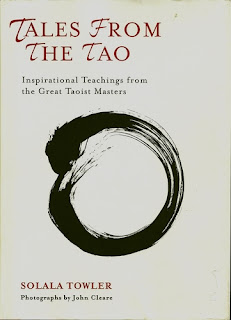 I always like reading Taoist stories, and this is a book of forty of them, interspersed with poems and wise sayings, and some gorgeous black and white photography, done with a mix of black and silver inks. There were many stories in here I had not read before. The one thing that taints the book a little is that the editor/author Solala Towler mixes in his own stories side by side with stories from Lao Tzu, Chuang Tzu, Lieh Tzu, Ch'en Hsuan-Yu, and other ancient writers, which suggests a lack of humility that feels somewhat disharmonious with the spirit of the book. But perhaps I'm just being snobbish. I found the book pleasing and delightful to read -- and another reminder that form and content are equally important in creating experience.
Posted by Jesse at 11:24 AM No comments: 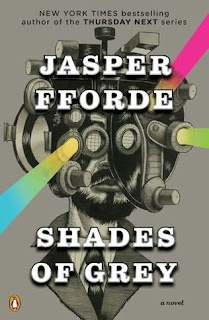 I always liked strange stories... and this is definitely one of those. I'm not sure why I find the books I like best in airports, but somehow I do. I was a bit early in the Orlando airport on my way to GDC (why is a long story) and I could tell there was something different about this book. It is the most unusual post-apocalyptic story I've ever read: a satire of British society, it is set in a world where individuals can only see one color, at levels of intensity that differ from person to person. The entire class structure is based on this "chromaticity", with people of different color sensitivity having different roles and status. An absurdist quality runs throughout the book, but remarkably, Fforde makes this bizarre world seem quite real with his incredible attention to detail. It took a couple chapters for my "eyes to adjust", as it were, but soon I found myself pulled right through.

And wouldn't you know it, the Ffink is making it a trilogy.
Posted by Jesse at 10:29 PM No comments: 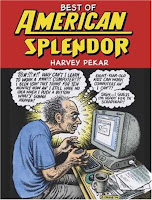 I'd long read about Harvey Pekar, and American Splendor, and I'd heard about his passing this past summer. But this was the first time I actually read any of it. I can see why everyone regards it so highly -- he does such an amazing job of capturing the nature of everyday life... in a way, certainly, that has never been done before. I frequently wonder -- why are comic artists so tormented? So much more so, it seems, than writers, or other graphic artists. My guess is that the torment makes the comics... not the other way around.
Posted by Jesse at 7:01 PM No comments:

Marshall McLuhan: You Know Nothing of My Work! 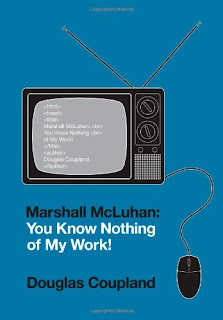 Oh, man, this was super fun. It caught me off guard that Douglas Coupland was writing a biography -- but it was a biography only he could write. I've dug through other biographies about McLuhan before, but never did I read one that made me understand his career path so clearly -- I expect because this book is so short and focused.

I've had a McLuhan obsession for a long time, even though I've found his books so difficult to wade through. I used to think it was me, but now I see it was Marshall. He just didn't care that people didn't follow him. He just went with the vibe of his thoughts. Building the bridge was the reader's problem. Coupland's book really shows how most of his writing was built off of lectures... which made me feel great, since that's how most of my writing is built. I guess it worked for Aristotle, too. Did you know that all we have left of Aristotle's work is his lecture notes? The books themselves were all burned. Anyway...

I recently got more focused on McLuhan than I ever had been. I had made some corny joke at a party at a neighbor's house, "The Medium is the Mysoginist", I think. (It's a problematic joke. No one ever reads "The Medium is the Massage," so no one gets it.) And the person I'm talking to is the father of the host, and says, "Oh, you know the works of Marshall McLuhan?" and I explained that in my line of work, he comes up a lot. And he says, "Judy and I were good friends with Marshall, when we were younger." It's worth mentioning here that Vince and Judy are extremely venerable, I'm not sure how old they are exactly, but they speak nostalgically about WWI, and visiting the 1935 World's Fair after college, etc. Anyway, I always like talking to them because they are so very interesting and wise. A few months later, I saw them again, and they said, "We're cleaning up our library... would you care to have our collection of McLuhan books?" and... yes... yes, I would. They were kind enough to bring them over, and I was kind of shocked to find that several were inscribed. The gem of the collection, I think, is Understanding Media, in which he wrote, "People will forgive you if you're wrong, but they'll never forgive you if you're right. For Vince and Judy, in affectionate recall of many extended conversations and our mutual investigation of many media. Marshall."

So... I'd tried to read this book before, but always got stymied. But Coupland's biography, combined with the aura of a signed book, have given me new steam -- Coupland has made me understand Marshall much better, and I get less stumped as I read. It is shocking how far ahead of his time he is... he is ahead of us still.

I can see the handwriting of both Vince and Judy throughout the book, annotating passages, and leaving thoughtful notes. In my boldness, I decided I would annotate, too, on the off chance that the world remembers me a little while, and perhaps someone will enjoy seeing a book with such an odd lineage.

Oh! After they gave me the books, Judy says... "Hmm... we have some other stuff Marshall gave us... like his old Tom Lehrer records. Would you want those?"

Anyway, I highly recommend Coupland's eccentric biography of good old eccentric Marshall.
Posted by Jesse at 9:56 AM No comments: 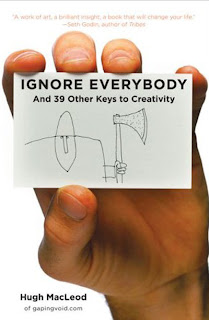 This is a book about something I wrestle with constantly... in short, being an artist. It's lonely and scary -- there's no two ways about it. I don't think there is a way it can't be lonely and scary. If you are going to stay true to that little voice, to that blurry vision, to that fickle scent trail, there is no choice but to ignore everyone... they are just going to make it harder for you to make it come true. It's hard, like climbing Everest is hard... but it's Everest for Christ's sake.

And there's funny cartoons, too.

You can read the first quarter of it free, here.
Posted by Jesse at 9:15 PM 2 comments:

Found a nice DVD of The Red Balloon at SF MOMA. I always wonder: how did he get that balloon so red? The attention to detail always astonishes me. It's so hard to imagine how the film was made.
Posted by Jesse at 11:14 PM No comments: