Atari Age: The Emergence of Video Games in America 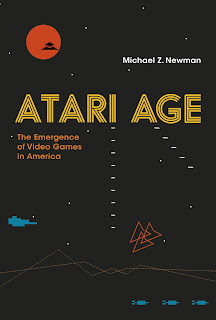 I picked up this book by Michael Z. Newman at GDC this year because I am always interested in videogame history, and in particular, I'm an Atari fanatic. Lately, I've become obsessed with collecting every possible Atari 2600 cart, and stitching them all together into one giant game... but that's another story.

From this book, I hoped to get some insight into the story of how Atari happened, and how it defined videogames. And... I got half of that. This book is very light on business and software development history, instead focusing on the impact of games on popular culture. Specifically, it focuses on 1972-1983, a relatively narrow and interesting focus. I can't say I learned a lot of facts from this book, but I definitely took away some interesting perspectives. Basically, here are my big three takeaways from this book.

1) Space Invaders. I always understood that Space Invaders was very popular, I remember, I was there when it happened. But what had not sunk in with me is exactly what a tipping point this one game was. As Newman tells it, before Space Invaders, video machines were viewed as lesser novelties by arcade owners. I remember these machines well - various car race games, games like Sea Wolf, etc. Apparently, they broke a lot, and didn't pull in the big money that pinball tended to. Space Invaders changed everything. Suddenly, a video machine was pulling in WAY more money than pinball machines. The dozens of successful arcade games that rapidly followed were all drafting off of the success of Space Invaders. It is yet another case of a single hit giving legitimacy to an entire industry. In many ways I feel that at this moment, VR is in the "Sea Wolf" stage. We have some good games, but we haven't yet had a breakout hit. But it will come, and when it does, it will change everything.

2) Pac-Man. Until I'd read Atari Age, I did not fully comprehend that Pac-Man was expressly created to reach a female audience, and the fact that it succeeded at doing so was central to its success. I remember when Pac-Man appeared, and it was like a new level of arcade machine, like going from the PC to the Mac in 1984. I remember saving up three dollars worth of quarters, riding my bike all the way out to Pavolo's Pizza one day, and carefully playing each game, studying and trying to master it. I was stunned and amazed when I finally saw the first cut scene -- no videogame before had contained that level of whimsical storytelling. We all wondered what other secrets this complex game might contain. I remember my babysitter was so proud to introduce me to her girlfriend who was good enough to get up the key screen. So, Pac-Man was notable in that it may have been the first game that intentionally sought a female audience, and actually succeeded in doing so.

3) Selling the Future. Atari Age spends a LOT of time analyzing advertisements for early computers. At first this seemed kind of ludicrous to me... the ads are cute, but why are they relevant? But soon it started to dawn on me -- what is really being analyzed here is what the psychology of the home computer really was. What was being sold was, yes, a business machine, and yes, a game machine, but something else, too: a gateway to intellectual mastery of the future. The possibility of becoming a "computer whiz" was central to these advertisements, and all that entailed. I remember these ads because they had me enraptured. I wanted to be that computer whiz, to own the future that way, so very badly. Looking back, a lot of it was false promises. But then, really, a lot of it wasn't. Sure, one was unlikely to get a job programming the VIC-20 or the Atari 800, but these things were a doorway to programming. And I, for one, stepped through that doorway, and it changed my life. Honestly, I don't think any product is sold under this premise any more... it is a difference in generations. There is no product today that promises that you will become a genius and master the future if learn to use it. What would that product even look like today?

So, anyway, I got some good things out of Atari Age, just not what I expected. Now if you'll excuse me, I've got some Yars' Revenge to play.
Posted by Jesse at 10:34 PM No comments: