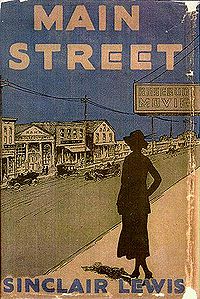 After reading Babbitt, I decided I should probably also read Main Street, since it was Lewis's first successful novel, and also his most successful novel. It is much longer than Babbitt, and while it grabbed me at first, it started to lose me as it went on. It is basically a story of a smart, independent woman who finds herself smothered by the fearful, petty nature of small town life. I've always had a hard time with gossip and small talk of all kinds, and so I was able to relate to it easily. I remarked to my mother that I was going to read Main Street, and she said, "Oh dear... it's so depressing." And indeed, I found that to be the case. Carol, the protagonist, is thwarted at every conceivable turn in her attempts to find some way to elevate the citizens of Gopher Prairie. What really makes this a great novel, I think, is that it is obvious that on some level, Carol is right that the townspeople are petty, stupid, and hypocritical, but at the same time, she is both arrogant and naive. Her desire to connect to the world of ideas makes her unable to successfully connect with people. While I liked the book, it does have a dark quality, and it goes on for so long, that my candle of hope burned out. But it did leave me with a number of memorable images -- the descriptions of the party games that Carol constructs, and how they play out are a wonderful commentary on the human condition, and "Main Street talk" as a term referring to banal neighborhood small talk has become a permanent part of my vocabulary. I also remain fascinated that what makes this novel great is that it doesn't take sides -- it paints everyone's foolishness equally. It's also a rare thing -- a novel by a man that has a female protagonist that seems somewhat credible... at least to me. I'd love to hear the point of view on this from any women who've read the book.

I'm sure I will long be quoting: "We'd get sick on too many cookies, but ever so much sicker on no cookies at all."
Posted by Jesse at 11:20 PM 1 comment: