I enjoy Nabokov a great deal, I'm not sure why. It has something to do with how he narrates, the way he lets us see the world through his eyes. I like his books best when they focus not on events, but on the thought processes of his characters. And this, his second novel, gives plenty of opportunity for that, having more or less exactly three characters. Every time I read his work, it makes me think about the nature of storytelling. He performs a marvelous piece of sleight of hand in this one, gradually letting the characters shift roles and (spoilers ahead) letting the antagonist become the protagonist, and the love interest become the villain. I can't say I've every experienced anything quite like that. I wonder if Nabokov was thinking this way, likening his characters to cards in a deck, and then performing a magic trick with them? Also, quite unexpectedly, the art of creating humanoid robots becomes a key part of the story... check this out...


The secret of this motion lay in the flexibility of voskin -- the very special stuff with which the Inventor had replaced live bones and live flesh. The two pseudopodia of the original voskiddy seemed alive not because it moved them (a mechanized "strollie" or zhivulya are after all no rarity, they breed like rabbits on sidewalks around Easter or Chiristmas) but rather because the material itself, animated by a so-called galvanobiotic current, remained active all the time -- rippling, tensing, slackening as if organically alive or even conscious, a double ripple grading into a triple dapple with the smoothness of reflections in water. It walked without jerking -- this was the wonder of it.

Anyway, at first I thought this was going to be a rather straightforward and dull love story... but it changes directions again and again, and I found myself quite haunted by it. I can't say I'm sure how I feel about it, but I know I can't stop thinking about it. The characters and scenes won't go away, and I'm sure that Dreyer with a pistol was in my dreams last night.

And of course, there's a dash of chess and butterflies.
Posted by Jesse at 10:34 PM No comments:

A Bucket of Blood 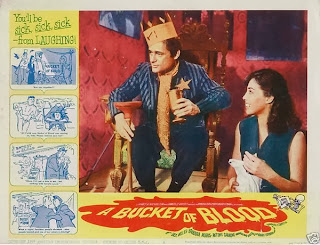 I *love* this movie. I've watched it several times in the past, and it was on TV the other night for Halloween season, and I gladly watched it again. And I enjoy it every time. I stare deeply into its eyes, and it stares back, unafraid, and every time, I see something deeper, something I didn't see before. It's funny, I constantly am meeting people who have read my game design book, and not one time has anyone asked about the quote in the frontispiece:

Life is an obscure hobo,
Bumming a ride on the omnibus of art.
-Maxwell H. Brock

It's a very bold statement, perhaps the boldest statement possible. And yet, no one who has read it there has ever occasioned to ask me who Maxwell H. Brock is. And I'm sure you don't care either. But I'll tell you anyway. He's nothing more than a fictional character in a low budget horror movie. But this is no ordinary horror movie -- this is a movie that somehow, in its ridiculous simplicity, explores the hall of mirrors of what it means to be an artist. And I think, quite possibly, more than all the philosophers and art historians and media digerati combined, this movie gets it right.
Posted by Jesse at 10:17 PM No comments: 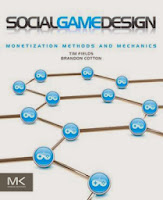 I'll be honest -- I wasn't expecting much from this book. The authors (Tim Fields and Brandon Cotton) freely admit they wrote it in just 14 weeks. I don't envy them the task of trying to write a book about something changing as rapidly as the world of social games. The book came out a year ago, and already, by not talking about the clever structures of Puzzle & Dragons and Candy Crush Saga, the book feels terribly out of date. And by no means, overall, can I say that it is a great book. However -- it has some great parts. The chapters that summarize monetization methods and business terms for social games are completely worth the price of admission. Without a doubt, these chapters present these more clearly and succinctly than any other source I have found, and I very much plan to make them required reading in my game design class. In short -- this book is worth a hearty skim, and also worth keeping around for reference if you are working on social or F2P games.
Posted by Jesse at 10:02 PM No comments:

I had heard of Rumi, but not really read any of his works. I found this little volume in a second hand shop, and thought I would check it out. I was absolutely stunned. How could poems written in the middle east in the dark ages simultaneously cut to the heart of Christianity and Zen Buddhism while sounding as modern as if they were written yesterday? Consider this, for example:

As human beings have an intellect
beyond the animals, so True Human Beings

have an intelligent soul
beyond ordinary awareness,

and it is all one thing,
their knowing and doing.

David didn't build the temple.
His son Solomon did,
but David built it too!

We speak of saints and prophets
and awakened ones in the plural,
but that's not the way it is.

Dogs and wolves are competitive and disparate,
but the lions of God have one soul.

I mean, that doesn't sound like 13th century poetry to me. Weirder still, read The City of Saba, and try to imagine that it was not written today, but written a thousand years ago. So, how can it be? Is Rumi a time traveller? And the answer is: well, it isn't 13th century poetry, not exactly. This is a translation by contemporary poet Coleman Barks. Weirdly, Barks does not read Farsi. Rather, he'd been reading the English translations of the original poems, and felt they seemed stiff, and well, not what they really wanted to be. So he undertook to translate the literal English translations into poems that felt more true. Interestingly, he's done this with the help, approval, and encouragement of Bawa Muhaiyaddeen, a Sufi mystic from Sri Lanka who has read and studied the originals. Somehow Coleman first met Bawa in dream, and then later in real life. Anyway, I find the poems intensely thrilling. They feel alive and wonderful and clever and true and wise, everything that I seek from poetry. Rumi wrote A LOT, and Barks has gradually been working on his own versions for decades, so there is much of it to explore, and I'm looking forward to that. And while I get a lot out of the poems, I think I might get even more out of the success Barks has had with his intense boldness, and his Emersonian resolve. It is just more evidence to me that when something feels true, though the world may tell you it is wrong, you should follow it with all your heart and soul. 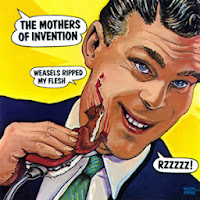 I've been a Zappa fan for about 25 years now, and though I've had this album since college, I never really listened to it. Partly the creepy cover keeps me away from it, and then the first track is just a painful cacophony. There are definitely some solid songs on here, but there is no unity to this album -- things don't feel connected in any way, and compared to other Zappa albums, it's not much fun to listen to. Better, probably, to just pull the good tracks out and stir them into your MP3 player.
Posted by Jesse at 4:42 PM 1 comment: