So, You Want to Be a Coder? 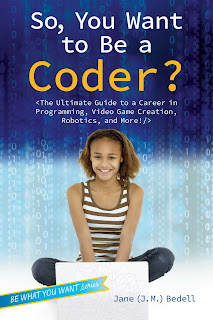 I picked this up because I wondered what advice the world was giving kids about coding these days. We certainly have come a long way from the books I started with in the 80's, which mostly took two forms: first, "Here's some badly written examples of BASIC programs written in a dialect that likely won't work on your computer," and second, "Here's what a computer is, CPU, ROM, RAM, blah, blah, blah," which was equally disappointing because it didn't really provide any knowledge you could use. The first kind of book at the very least forced you learn debugging!

This book is a whole different story. It is full of interviews with real software developers, telling stories of how they got into coding, and what they like about it. It also explains a great deal about the realities of software development, and does a decent job outlining the kinds of projects you might get into (web, systems, games, AI, robots, security/hacking). It also outlines the languages you are likely to be working in (I must admit that I am kind of freaked out that computer languages seem to have stopped changing and improving at this point. Will we really be writing in C++ in the year 2030?), and talks about their differences. The one thing it does not do is teach any coding. Honestly, I think that was the best choice the author could make -- she leaves the long process of coding instruction to other books or media, and spends her time framing up the experience of coding. The only part of the book I disliked somewhat was a quiz at the beginning that suggests that if you'd rather work with other people than work alone, then coding probably isn't for you, which I think is both an incorrect and insulting stereotype.

You can see from the cover that the book is somewhat slanted at girls, but not overly so. There is a lot of "bubble writing" on the inside, and emphasis on the personal experience of coding, but overall I would say it only slants towards girls in a kind of 60/40 way, which seems more than fair given the history of coding books which have slanted the other direction.

In short, if you have a tween that is thinking about a career in coding, this book would be a great complement to their attempts to learn to code, helpfully putting the possibilities of coding into context.
Posted by Jesse at 3:52 PM No comments: