This book is a based on an interesting idea. Julia Wertz put out a call to the comic drawing community to submit comics based on "missed connections" postings on Craig's List. These were new to me -- people posting messages to others that they had seen somewhere, but failed to make the connection they wanted to -- that is, failed to secure a name or phone number. So, they post on Craig's list, hoping that somehow they might be able to have a second chance. There's a kind of poignant sadness in this, which makes for some good storytelling. Mostly, these are funny interpretations of these often bizarre messages, but some are quite sweet.

I mean, they have CATACOMBS. And they were able to provide me with a tiny, tiny spring that I needed to fix my razor. Don't go there to buy tools, you'll mostly be disappointed. Go there to buy the weird pieces and parts no one else has. 2114 E. Carson St., Pittsburgh, PA.
Posted by Jesse at 8:46 PM No comments:

Tender is the Night 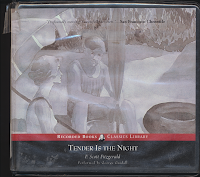 I was so moved by The Great Gatsby, I became curious about Fitzgerald's other works. I found this to be a very different book. While action is what primarily moves us through Gatsby, the pace here, and what moves the story, is very different indeed. And I have to admit, I found it pretty disappointing. I was very involved in Part I, where a young movie starlet falls in love with a psychoanalyst. But in Part II, everything changes -- no longer is the story told from the point of the view of the starlet, but instead from that of the psychoanalyst, and it turns into an extended flashback about his relationship with his wife, which is extremely strange, and to my taste, fairly dull. So, in short, this turns from a sparkling story of a love triangle into a kind of depressing story about a mid-life crisis. Apparently, Fitzgerald wrote it while his wife was hospitalized for schizophrenia, and I have to almost wonder if he wrote Part I before that happened, and wrote the rest after, for there is little in the beginning that even touches on psychology, and the rest of the book deals with it obsessively. And, in fact, checking wikipedia, something like that seems to be exactly what happened. I guess there's a cruel irony here -- Zelda's real life schizophrenia rendered this book schizophrenic as well.
Posted by Jesse at 8:25 PM No comments:

Another great book by Bukowski. This is a lot like Post Office, in that it is a novel created by stringing together lots of small, connected stories. The thing that resonates for me about his work, and these stories in particular, is that no matter how bad his life gets (no money, no friends, injuries, crabs, etc.) he never panics, he never despairs. Somehow, his incredibly simple life, his freedom, and his constant living in the moment makes him seem as happy, or happier than someone well-off with a pack of middle-class worries. I found these stories incredibly comforting -- they help make clear that most of my problems are a bunch of made-up nonsense. There is something in his style and his delivery that gives him a voice unlike any other I've ever read. His writing is simple, his point of view is detached, and he seems well aware of the irony of his situation -- he is intelligent enough to be aware of the causes of his problems, but is completely unable to do anything about them.

PS -- I had to look up "factotum." I assumed it was "a sum of the facts" or something like that, but it's not. It means "a person who does a lot of different jobs." It's a very unusual word, because it is an archaic term that has retained its meaning, but is now only used as a joke.
Posted by Jesse at 7:54 PM No comments:

I love psychedelic 1960's movies, and this is definitely one! James Coburn plays a psychiatrist to the president, and when he decides to quit, every organization on earth wants to kidnap him, except for the CIA, who wants him dead. The whole thing takes a decidedly sci-fi turn when he is kidnapped by AT&T, as you can see here. Anyway, it was tremendous fun! I wonder what other wonders are still hiding?
Posted by Jesse at 6:36 PM No comments:

An incredibly simple and addictive word game from tonypa. Tonypa has an incredible knack for simple, fun, elegant games. But I wonder if he's making any money? My favorite mechanic here is that it remembers what words you've used before, and you can't use them again, which makes for an interesting challenge that increases ever so gradually.
Posted by Jesse at 10:17 PM No comments: