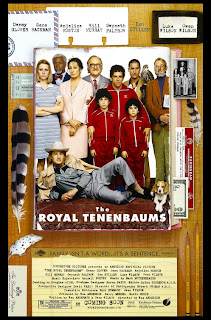 I find that nowadays, whenever I ask people about whether they've read J.D. Salinger's books that aren't Catcher in the Rye, that is, Franny and Zooey, Seymour: an Introduction, etc., I find they haven't, which is understandable. And when I try to explain that all the other books are about an unstable family of genius kids (the Glass children) who grow up in a NYC apartment with their mother and have problems dealing with reality as adults, people say, "Oh... like The Royal Tenenbaums." So, I figured I should see it. And, yeah, wow, it's sort of like this movie is a kind of valentine to Salinger's books. When Beatrice Glass gets married, her new last name is Tannenbaum, even.

I found I had mixed feelings about the film. Visually and stylistically, it is stunning. Fantastic costumes and sets and cinematography, and some very good performances. I was fascinated that while it is set in the year 2000, the filmmakers are very careful never to show any technology from after 1979. No celphones, no flat screen tvs, pay phones cost a quarter, and you DIAL them. There's even a Hotpoint refrigerator that must be from 1961. But the story didn't really gel for me. There wasn't much in the way of character transformation -- just small conflicts and somewhat obvious resolutions in a world of eccentric characters. I wanted to like it more than I did -- I wanted it to mean more.

I wonder what it is about the Glass children that keeps lingering? Clearly, there is something important there... I'm just not sure what it is.
Posted by Jesse at 10:00 AM No comments: 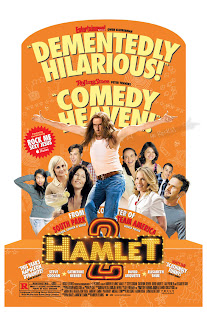 It's funny -- just the other day I was thinking that it would be funny to make a sequel to Hamlet. And here this movie pops up on TV. I didn't think I'd heard of it before, but who knows? Anyway, we really enjoyed it. The saving grace was the main character, a washed up actor turned drama teacher -- he's an idiot, but he has genuinely redeeming qualities. Acting that part was surely a delicate balance, and Steve Coogan really mastered it. Without that, the whole thing would have fallen flat. Elizabeth Shue as Elizabeth Shue was also a really great touch. The whole movie, like Be Kind Rewind, is a meditation on the idea that passion is more important than talent... and it ends up being weirdly inspirational.
Posted by Jesse at 4:36 PM 1 comment: