W.C. Fields is Alive and Drunk at Your Father's Mustache 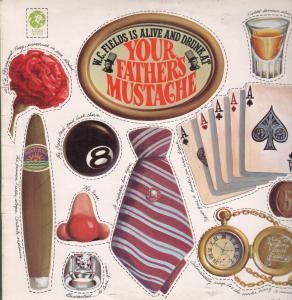 This record is an atrocity. At first glance I believed that it might be a recording of Fields doing some kind of nightclub routine that I hadn't heard. It is nothing of the kind. I suspect the title is playing off of Jacques Brel, but it is some weird musical group that performs songs ranging from late 1800's (Stephen Foster) to late 60's (the Beatles) in a sort of ragtime kind of style with a large chorus on vocals. It was released in 1967, and seems to have trying to play off the strange resurgence in popularity that Fields had in the sixties. Why that happened always stumped me... I guess it was because of Fields' obvious flaunting of authority, and his blunt authenticity? I can distinctly remember seeing adults getting a weird kind of glassy-eyed nostalgia for him, even in the seventies. I believe that I had a version of "Big Shot Pool" from Ideal that had a picture of him on the box, since it was a game about fancy trick billiard shots (and an excellent game, by the way!) though that could be my imagination.

Anyway -- I can't say I understand the sixties fascination with Fields, but this album in no way does him honor; it is saccharine and dull, and I like to imagine that he would smash it with a hammer, or perhaps just chuck the entire Victrola out the window.
Posted by Jesse at 12:01 AM