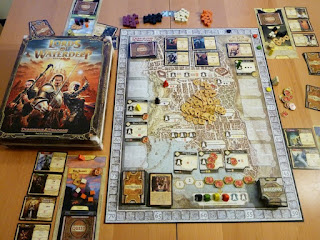 Wow -- I really like this game! It's one of these "worker placement" games, kind of like Agricola, but not as cutthroat, because you get to choose what quests you are going to pursue. The D&D theming is cute, but not really tied to the mechanics, because mostly it is a game about harvesting scarce resources to spend on even scarcer resources, but themed as "gathering a party" and "sending them on quests." But that doesn't hurt anything, it makes it kind of cute. I like all the choices, I like the game balance (it must have taken forever to get right), and I like all the different options that keep popping up during the game.

Hey, this is a good place for a side rant I've wanted to make for 30 years. I was a massive D&D fan in the eighties. It defined my life for a time, and it likely forged the career I have today. There were a lot of things that were exciting and revolutionary about D&D. But there is one thing I could never understand... why does the D&D story world suck so badly? In the beginning, it was a loose mishmash of Tolkein, Greek Myths, Elric, Conan, and King Arthur. That wasn't so bad -- it was all roll your own. but as the eighties proceeded, they started to make a sort of world. And it was terrible! B2, Keep on the Borderlands? Revoltingly bad and confusing, especially for new players. Some modules were amazing (I still see S1 in my dreams), some were not (C1, I'm looking at you, nor am I a fan of G123). But we didn't have a coherent world. So we were all so excited when the "World of Greyhawk" map appeared! And, while it looked cool, it sucked. It was way too big, with too many countries, and it was completely unclear how to use this as a DM. There was no connection between it and the Monster Manual, for example. Later, they stared writing various D&D novels to try and get some kind of concrete world in place, and so they seem to have something slightly more coherent now... but by the nineties they had lost me, and when I look at what they have now, I'm still not seeing a solid, Tolkeinesque world. Maybe it wouldn't have been possible? It bums me out that it was a massive missed opportunity. Anyway, I only mention it because I'm still feeling that today... "Lords of Waterdeep?" The theming and the story and even the box art raise no emotion in me.. not like this did. This is a world I wanted to be in. Anyway, maybe their "no solid world" strategy makes sense? Maybe it makes space for people to make their own things? I'm not sure. I guess I wish I was still moved emotionally by D&D like I was in the beginning.

Anyway, to sum up Lords of Waterdeep: Relatively simple, fun, not too cutthroat, and the right level of thinking. I'm sure some people would prefer a more competitive game -- but this one is just right for me. Well done, WotC!
Posted by Jesse at 11:45 PM