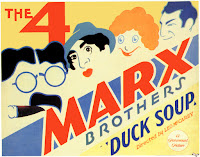 In a conversation with my daughter not too long ago, I made the terrifying realization that not only had she never seen a Marx Brothers movie, she actually HAD NO IDEA WHO THE MARX BROTHERS WERE! I mean, no idea. Never heard of Groucho. Glasses, moustache, cigar, it all meant nothing to her. "Do you mean like Karl Marx?" she asked, in all seriousness. "That tears it," I told her, "you've had too much schooling, and not enough fooling!" Comedy is something we take seriously in the Schell household, so we all agreed that something must be done. But which movie to start with? The Cocoanuts, though first, is a bit slow. Some others have seemingly unnecessary padding or serious songs that might bore a modern teenager. But, of course! Duck Soup! It has none of these things. It was the film that made me fall in love with the Marx Brothers (I think I was maybe four? I think I called Groucho "Firefly" until I was six. A man named Firefly was enough to win me over, but the antics of Rufus T. Firefly were irresistible). It is very short (70 minutes), and is certainly the most boiled down of all Marx Brothers films. Many of the others have a "serious story" with relatable characters that the brothers crash into. Duck Soup doesn't bother. It has tiny base story, where all the characters are already simple caricatures, and Marx Brothers dominate the film. It never stops moving, and just when you think it might start making sense, it takes a turn and obstinately refuses to hold to any logical structure. It is the last of the five Paramount Marx Brothers films, and the bravery and daring that can come with being very comfortable with what you are doing really comes through here. I'll go so far as to say that this film captures the essence of the Marx Brothers better than any other. What is that essence exactly? That's a long conversation. They simply aren't like any other comedic structure I know of. The balance of Groucho, Chico, and Harpo simply shouldn't work -- but somehow it does, and there it is. I would have to think very hard to understand exactly how it works. I know part of the key is that Groucho and Harpo almost never interact... but again, I would have to do a lot more thinking to begin to comprehend it. I know of no modern analogue (not any ancient analogue!) for their comedic balance.

So... how did it go over? She laughed so hard it gave her hiccups. Can you imagine creating something so funny that eighty years later, after everyone involved has died, people are still laughing at it uncontrollably? She always respects good comedy, and I was quite proud to see how thoroughly she appreciated the film. Her main reaction was astonishment that the characters were so amazing, and so insanely funny. I continue to be astonished myself.
Posted by Jesse at 12:04 AM