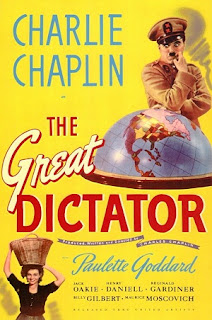 This is one of those movies that everyone knows about, but I suspect very few people have actually seen it. Have you? No, really, not just the globe sequence, but the whole movie? Well, anyway, I hadn't. I remember buying a clearance copy at Blockbuster Video in 1987, only to find that it only had 15 minutes of footage, and I never followed up until now. It happened to be on TCM one night, and our daughter studied WWII in school this year, so I recorded it for us to watch. I was quite surprised at how dark and frank it was -- I had no idea it would be so direct about abuses against the Jews in the ghettos. It was quite a bold accomplishment, to produce this film in 1940, make it so direct, and also make it so funny and so inspiring. It isn't perfect -- as Chaplin's first speaking role, there is some awkwardness -- he sometimes moves in a pantomime way that seems bizarre in a talking picture. I understand the state department wasn't very happy about the film - they believed it would only serve to move the world further away from peace. Chaplin later said that he if he had known the true extent of the Nazi atrocities, he would not have made the film, which all leads to deep questions about the power and the responsibility of the jester in society. I've often wondered if Jon Stewart has stayed away from certain topics, concerned that he might make certain situations worse.

It is a unique film in many respects, and while I enjoyed it much more than I expected, I very much hope that no one ever has need to make a film like this again.
Posted by Jesse at 12:51 AM