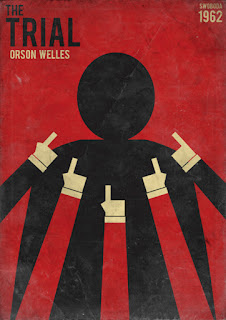 I had no idea this existed, and then I tripped over it on TCM one night. It's Orson Welles' interpretation of Franz Kafka's The Trial, starring Anthony Perkins. I had really enjoyed the haunting quality of the book, so I was quite intrigued to know how Welles would handle it as a film. First: it's gorgeous! The locations and cinematography do a beautiful job of capturing the dreamlike weirdness of the book. Second: Anthony Perkins can act! I only really remembered him from Psycho, and, well, playing a creepy guy always seems to me to be an easier challenge than playing a real person.

The film does have weaknesses. It is quite slavish to the book, probably to its peril. In trying to cram everything in, everyone talks very fast. In the book, we get to hear Joseph K.'s inner monologue to help give us context. In the film, we don't get that, so when we meet the woman dragging the trunk, we aren't given a chance to understand just how strange it is. The whole thing becomes a kind of fast-motion fun house, which is visually engaging, but not as emotionally engaging as it might be.

The part I found most surprising was the ending (spoilers ahead). As slavish as he was, Welles found it necessary to change Kafka's ending! For me, the message of the book was that just by being born into society, one is instantly judged, instantly on trial, instantly doomed. And this fact means that no human being can ever truly have dignity. Kafka's ending drives this point home. But Welles apparently concluded that Joseph K. was surely Jewish, and to create a film that featured a Jew pitilessly humiliated and murdered by the government was in bad taste, so he made a minor change that did not let Joseph K. survive, but let him at least go down fighting. It's a peculiar, almost cartoonish ending, that personally, I thought cheapened the whole thing. Even Welles admitted that he wasn't happy with this solution, but it was the best he could think of to solve his problem. And I suspect this gives us an interesting view into Welles' character. He was definitely a man to whom dignity was central. I suspect that the The Trial was interesting to him since it is a story about man's battle for dignity. But I don't think I buy his story about not wanting to offend the Jews -- WWII was over about 20 years before this film, and when did Welles care about offending anyone? I think that Welles himself could not accept the idea of a man's battle for dignity shown to be impossible and futile, and so he pulled a Kobayashi Maru, at Kafka's expense, and at the expense of the integrity of the film, of the integrity of Welles himself. I believe this captures the essence of the tragic path of Welles' life and career: protecting one's dignity at the expense of one's integrity. One could easily argue this is also the theme of Citizen Kane, and The Third Man -- possibly of all of Welles' work. He once said The Trial was his greatest film. If dignity over integrity is the great theme of his life, then what greater art could he create than actually compromising his own integrity for the sake of not just his own dignity, but the dignity of the everyman?
Posted by Jesse at 1:20 AM