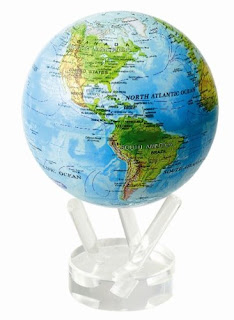 I love things that seem magical, and yow, the Mova Globe is one of those things (video with minor spoilers here). At first glance it is an innocuous rotating globe, that one imagines is powered by a battery. But the closer you look, the stranger it gets. It isn’t supported in any kind of central way, and there is no visible motor. Stranger still, it has no batteries. It simply rotates of its own accord. I like keeping it on my desk as a conversation piece. Most people don’t even notice it. But for those who do, I’m fascinated to watch their minds try to comprehend it. More than half seem to come to a conclusion that it is a clever perpetual motion machine: “I guess the inside is tilted so it is forever rolling downhill…?” which shows that most people don’t spend much time thinking about physics, I think. After studying the manual, I think I *mostly* understand how it works, although it’s interaction with the earth’s magnetic field is still somewhat mysterious to me. The manual reads like something included with Happy Fun Ball. “If globe emits a waxy substance, seal and return to the factory IMMEDIATELY” – “If Earth’s magnetic field undergoes significant change, globe may cease rotating, or change direction of rotation.” But that’s cool – I like a little mystery in my life.

Postscript courtesy of Shawn Patton: The inventor explains all!
Posted by Jesse at 10:19 PM