Games from long ago 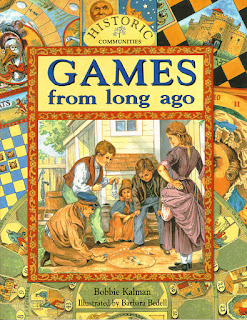 This simple book has some great descriptions of early American games. I think I bought it at Old Economy Village. It has gorgeous color illustrations throughout. Games I'd never heard of:


The Cudgel Game: The game was a favorite among boys in the late 1800s. Instead of real cudgels, the two blindfolded players are given rolled-up newspapers. They lie on their stomach, head to head, holding each other by the left hand. One player calls out "Are your ready?" When the other player replies "yes," the first player ties to swat him or her with the newspaper.

Corn Husking: After the harvest, everyone gathered to husk corn for winter storage. The young man who found a red ear of corn was allowed to kiss the young woman sitting closest to him. Some men cheated by bringing red corn to the bee in their pockets. Not all girls were happy when a young man produced an ear of corn!

Dumb Crambo: In short, the game of Password, with a way cooler name.

It is a short book, easily read and understood by children, but with surprises for any game enthusiast. I totally want to play the cudgel game.
Posted by Jesse at 11:32 PM