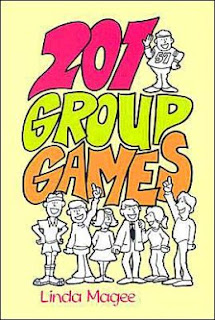 This book is just what it sounds like. Rules for 201 group party games are stated in simple paragraphs. Here are some of my favorites.


Toothpicks: Scatter a box of toothpicks on the floor and see who can pick up the most toothpicks in a given time. After all the excitement, count the picks and reward the winner. (excitement?)

Picking Noses: This game is for married couples. Have four women sit down, cover them with a sheet, cut holes in the sheet for their noses to come through. The husbands are then brought out one by one and each picks (locates) his wife's nose. When he thinks he has located it, he kisses the tip of it. After all have finished, the women are uncovered. Roles are then reversed and each woman picks her husband's nose. I want to write a one act play about that one.

Chicken Yard Fight: Draw a circle on the ground. Have two players stand inside it each holding his ankles. At a given signal, each player tries to push the other from the circle or make him lose his balance. The first player to release his ankles, leave the circle, or fall, is the loser. This game expresses the essence of "game" better than anything I know. Balance, the magic circle, Bernard Suits, it's all there in those four sentences.

The Winker: Arrange enough chairs in a circle to seat all of teh girls in teh group. Leave one chair empty. A boy stands behind every chair with hands at his side. The boy behind the empty chair is the "winker." he must find a girl to fill his chair. To do so, he winks at a girl and she must slip away before the boy behind her puts his hand on her shoulder. Should she escape, her boy becomes the "winker" and must fill his chair. That game has some deep commentary about the human condition. It think the nose picking play just got three acts, with this as the inciting incident. It's like an erotic version of musical chairs.

There are enough bible references in the book to make clear this was primarily designed for church groups -- and there are some weirdly old-fashioned sexist ideas (the winker is just the beginning), but it is a nice, concisely stated collection of party games.
Posted by Jesse at 12:08 AM