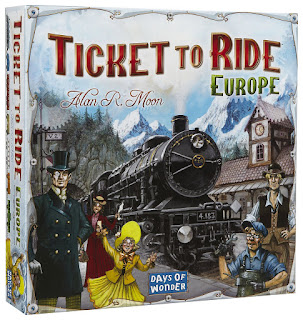 Ticket to Ride is an incredibly elegant and clever game that fully deserves the many accolades it has received. In many ways, I feel like it is the game that Monopoly is trying to be. Both games are abstractions of land ownership, both have a variety of territories with different values, both have a significant number of random events, both are simple enough for a family to play together. But Ticket to Ride wins in terms of simplicity and elegance. The number of rules is relatively small, and the number of actions is four. Everyone gets to play until the very end, and surprising reversals can happen, even near the end. The fact that players compete for territory, but each have different (secret) goals, and can sign up for extra goals at any time, allows for interesting flexibility, but unlike my unfavorite Settlers of Catan there is precious little backstabbing, since it is hard to know what your competitors' goals actually are, which I think makes for a much more friendly game.

The "Europe" edition has interesting variants on the basic edition, though I'm not completely sure they are all for the better. Other than a denser map (it is Europe, after all), there are three new elements in place: Some routes (ferries) require locomotives, some routes (tunnels) are variable cost, and players have a choice of adding "train stations" to make use of other players routes. These extra flourishes add to the decisions one makes, but I'm not sure they actually improve the game. If you are new to TtR, I'd suggest starting with the basic edition -- but, if you are an experienced player looking for a slightly more complex spin on an old favorite, you might want to check this one out.
Posted by Jesse at 7:59 PM