I Think We're All Bozos On This Bus 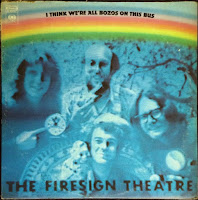 Well, I won't say I understand everything, but it was certainly different, and... oh, yes — well worth a dollar.

I have easily listened to this album 30 times, and every time I notice something new. It is, by far, my favorite in the massive Firesign Theatre oeuvre. I listened to it this time in celebration of completing the Daniel Tiger ride (Daniel is no Artie Choke, nor a hologram, but he and his mechanical friends do converse and sing songs at Idlewild Park). We listened to it in the car on the drive out there. It was new to the others on the Daniel Tiger team. I think it is hard for younger people to even imagine the nature of Firesign Theatre albums -- having to sit still and just listen to a complex surreal story is quite different from so much of what we do today. Certainly, we have podcasts, but are there any that put that level of attention to detail into what they create? This album was so wildly ahead of its time. Recorded in 1971, it predicts Epcot Center, Turtle Talk with Crush, hacking, Disney Magicbands, Robot Wars, and, oh, so much more -- a lot of stuff that hasn't happened yet. Having spent much of my life trying to create interactive theme parks, this album was a major influence on me. Back in 1995, when I started at the Disney VR Studio, I could not have been more thrilled that our two Onyx mainframes were named "Barney" and "Ahclem"... it made me feel like I had truly found my people, that I was truly home.

I had a weird run-in with the future when we listened to this on the way to Idlewild -- I hunted for my CD of the album all around my house in vain (I believe I likely lent it to a student who did not return it). But, this being the future (a fair for all and no fair to anybody) I easily found a copy of it on youtube, and streamed it through my phone via bluetooth to the car stereo while we drove there, and it sounded great. The surreal part was hearing the computerized messages of the album ("Mister alclem, please report to the nearest hospitality shelter") be interrupted by the car's navigational system, which might as well have been saying "Antelope Freeway, one mile." Versions in quadraphonic (both vinyl and 8-track) were released. Given my new fascination with 8-track, maybe I should try one of those out?

There is something so weird and true about this album, really, to be fair, about all four of the original Firesign albums, in their strange, connected tetraology. Why exactly did things go downhill for them?  None of the followup albums (I think have them all) is anywhere near the greatness of these four. I've never understood it. I've never understood the artists who do their best work when they are young. That always scares the hell out of me -- the idea that my best work might be behind me, or that one must sell one's soul to do something perfectly. Gah! Four members of FT, four perfect albums, in exchange for four souls! I won't dwell on it. In my head, I keep a list of perfect works of art -- this is definitely one of them. I hope one day to create something this visionary and inspirational. If it's new to you, heed my advice: don't multitask with this. Find a dark room and some headphones, and see if you can keep still for 39 minutes. Maybe you'll be the first one who actually understands the thing.
Posted by Jesse at 11:48 PM