Scream on Someone You Love Today 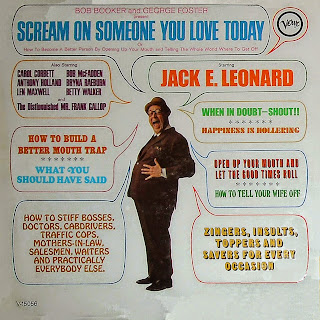 This record is from 1967... but culturally, it feels more like, say, 1959. It's a collection of "snappy answers to stupid questions", mother-in-law jokes, dusty gags, and eye-rolling one-liners from Rodney Dangerfield prototype Jack E. Leonard. Interestingly, it has a cast, and comedy songs interspersed with comedy patter. I can't say I did any laughing, but I appreciated the effort. The only part I like is the cover. So... why do I keep listening to it?