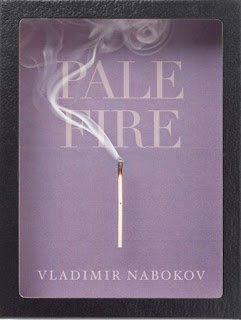 I have always enjoyed Nabokov (see these for example), but it is safe to say that I enjoyed this more than any of his other works I've read thus far. It is not a novel in the conventional sense. Rather, it is a well-crafted 1000 line poem, followed by line-by-line notes from a critic. The notes about the poem are extensive, and form the bulk of the text. (Minor spoilers follow). Quickly the reader learns that the critic is somewhat eccentric, and writing under some duress. Further, he is strange, self-involved, and foreign. He misunderstands basic aspects of the poem that would be obvious to the average American. However, one gradually learns that he knew the poet well... a little too well, as the critic has been stalking and spying on the poet. I found myself simultaneously repulsed by critic Charles Kinbote, but also drawn in -- as his creepy stalking gives insight about the poem and the poet that would have been available no other way. Gradually, the critic reveals more and more, and it becomes clear that he is somehow involved in the recent death of the poet... but as much as we want to know what is truly going on, we are held hostage, as at last he has the stage to tell the stories that interest him most -- he has hijacked the fame of the great poet John Shade, and is using it to take center stage. By telling us the stories that we are least interested in, he gradually becomes interesting, as the reader undergoes a sort of literary Stockholm syndrome.

This is one of the rare books that, once I reached the end, I immediately started reading again -- so much insight is gained bit by bit through the book that going back to read it again, each line is seen in a new and different light. This book, written in 1962, was far ahead of its time, and is arguably Nabokov's masterpiece. It is so strange, so personal, so funny, and so post-modern, that it casts a spell that is hard to resist. I wish it had perhaps one more twist to it, but perhaps the haunting ending is enough. I should also mention that I did not read it per se, but rather listened to the audiobook narrated by Marc Vietor. His Zemban accent is perfect, and he manages to capture the bizarre emotions of Charles Kimbote perfectly. The text is somewhat non-linear, a strange match for an audiobook, but Vietor's portrayal of Kimbote makes it worthwhile. I think I will probably get a paper copy (or perhaps two, as Kimbote wisely recommends) for my second reading. There is also a second narrator for the poem, and the contrast between Shade and Kimbote makes the audiobook unique.

This book is a perfect example of the unique power of the novel to allow a single person to create a deep, rich, strange world, and present it in their own way. In a sense, it is on many levels about how the writer holds the reader hostage. Despite Kimbote's best attempts, he is held hostage by Shade, and so in return, he holds us hostage, preventing Shade from doing the same to us. But all along we've all been held by Nabokov... but why? I hope to create something somewhere near this great sometime in my life. It isn't perfect -- there are parts that seem unnecessary, and I still feel one more plot twist would have really made this perfect, but it is a bit like the time Paul McCartney was asked whether the White Album would have been better if some of the lesser songs had been removed from it, and he wisely replied, "Yes, perhaps, but then it wouldn't be the f&*^ing White Album, would it?" I'll miss you, Charles Kimbote!

PS - It also contains some fun references to Pnin, which features my favorite Nabokov character. And, yes, plenty of butterflies, Russian humor, chess, and monomania. Possibly the most monomania of any of his novels, in fact. I hope one day I can create something that reaches this level of greatness.