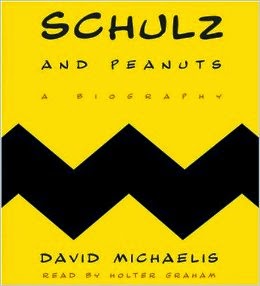 The Peanuts comics meant a lot to me growing up, my whole life, really. We had several collections of reprints when I was young, and I eagerly read and re-read them, lying on the big fuzzy rug in the living room. I even went through a period at age 6 or 7 where I obsessively listened to the cast album of "You're a Good Man, Charlie Brown", acting out each scene. I even learned out to lie down on the top of our doghouse without falling off. I still have the very last Sunday Peanuts comic saved. So, naturally, I was interested in reading this thorough biography from David Michaelis. Honestly, I'm not sure how I feel about it. It paints Schulz as a somewhat sad man, not well connected to his family, or to anyone, really. It suggests that the comic was his obsession, was his world. It really surprised me to learn how much the strip characters were based on people in his life. Lucy, for example, seems to derive very strongly from his first wife, Joyce. You can even seen Lucy becoming less venomous in the strip after Schulz eventually divorces Joyce. It would seem that, like many artists, Schulz took the pain in his life and channeled it into his art. I know that I say things when I write, and when I give talks that I would not necessarily be ready to say in real life. Which gets into the question of what real life is. It isn't a place we can speak the truth plainly. Peanuts was fascinating because it was about intelligent children who somehow manage to speak the truth -- the truth about they feel, about how the world works. There is a lot of depth in Peanuts, more than we know, I expect. Never before has there been a body of work like it. 17,897 comic strips, all about one small set of characters. We each find our purpose and run after it until we can't run any more. It's weird to think how many billions of people have been influenced by those characters. The White Album wouldn't have had "Happiness is a Warm Gun" if Lucy hadn't given us "Happiness is a Warm Puppy" first. I guess what is saddest about the book is the realization that for all his success, wealth, and fame, Schulz didn't seem very happy. His anxiety and fears were very present in his life. But without them, could the comic have still been great? It makes me wonder if I should be doing a better job of channeling my own problems in my own art. Life is long and strange -- but I'm very glad to have gotten to know Sparky better. Thanks David Michaelis!

PS -- While normally I am a fan of audiobooks, I cannot recommend that you experience this via audiobook. The print version has Peanuts comics integrated into text, showing clearly how Schulz was weaving events of his life into the comic. The audio book can only be oblique about this, whereas the print book is pointed and sometimes startling. So... this is one you probably want to read with your eyes.
Posted by Jesse at 12:11 AM