Then More Than Ever 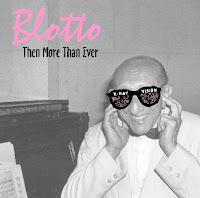 Good old Blotto. This was a Christmas gift from Jeff McGinley. We had a funny relationship with Blotto back in college. We were both novelty music nerds, with a weekly radio show called "Laughter Hours" on WRPI in Troy, NY. Blotto was actually a local band, centered in Albany, NY, so we were excited when we were able to hear them play -- they were funny, and they were such one-hit-wonder underdogs. (one-hit-wonderdogs?) Anyway, here's my stupid Blotto story. One of the band members was named "Bowtie" and during one show revealed that he had an undergraduate degree in chemical engineering. Well, when I was taking my Chemistry I class, there was a TA who looked just like Bowtie, and who, in fact, wore a bow tie all the time. So, I asked him, "Are you Bowtie Blotto?" and he said, "Yes." Which I thought was pretty cool, and very credible, since it was clear that performing in Blotto was not a full-time job. Anyway, I told a lot of people about it, and I was pretty mad when later he said, "Yeah, you know, I was just kidding you about that. I didn't even know what you were talking about." Apparently he thought I was teasing him or something. Anyway, there's my boring Blotto story.

Oh, and this CD? It's okay. It's got the "Driver's Ed Movie" song on it, which is good -- the rest of it is kind of so-so, I think. But, hey, anything that takes me back twenty years in time is pretty great.
Posted by Jesse at 3:34 PM