Do You Believe In Gosh? 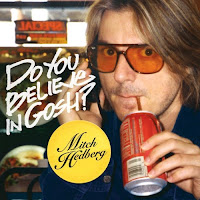 I finally got around to finding some Mitch Hedberg CD's -- I always found him a fascinating comedian. There is something about his combination of innocence and intensity that makes him more than just funny -- he seems like a guy it would be fun to hang out with. Zippy the Pinhead says that comedy is the unity of opposites, and Mitch Hedberg is a perfect example -- a cool, stoner character who stands up telling corny one-liners like Henny Youngman. Part of his charm is that he never seems comfortable onstage -- he always seems nervous, like he doesn't belong there. But on the other hand, you can tell that he thinks a lot about to how best present his material. "A comedian has to start strong and finish strong. You can't be like pancakes: all exciting at first, but by the end you're sick of them."

This album was released shortly after his tragic drug overdose. I keep wondering ... was his drug use just recreational, or was it related to his insecurity? Or was the insecurity all an act? Or was it all one inseparable package? All I know is, it sucks that you left us, Mitch. We miss you.
Posted by Jesse at 8:13 PM