If I Had a Million 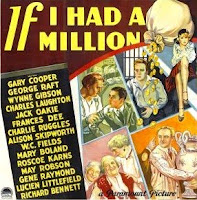 I saw this movie last when I was maybe nine or ten years old, and it made a huge impression on me. I think it's safe to say I've thought about it every few months for my whole life. It is the simply told tale of a dying millionaire who hates his family, and decides to leave his vast wealth to people randomly chosen from the phone book, a million dollars each. This was one of the last movies made before the Hays Act, and so it is more open and frank than movies made just a couple years later. For example, the storyline featuring W.C. Fields that is all about a couple living out their fantasy of crashing their car into bad drivers would probably have been forbidden once the Hays Act was in effect.

On a personal level, this movie was very nostalgic for me to see, because I remember how much my father enjoyed it -- he remembered seeing it when he was a boy. I wonder -- five hundred years from now, will we have love of films passed down for dozens of generations? Or will the world have changed too much for 20th century films to mean anything to anyone?
Posted by Jesse at 7:48 PM