Brand Upon The Brain! 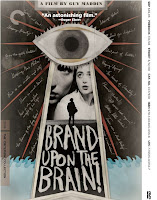 I hated this. I really wanted to like it, too. I mean, I really like the idea of a modern silent movie, filmed in a classic style. Unfortunately, the combination of constant camera cuts and disturbing content (torture, murder, nudity, sex, cannibalism, etc.) for no reason other than shock value made the whole thing feel cheap and pointless.

I understand that many of the scenes were from the director's life, and also that the film was meant not to stand on its own, but to be part of a theater experience with live music, singers, and narrator. But still, it just wasn't for me. I will admit that I was fascinated with the use of narration in a silent film. It seemed to be a tool to lead people not familiar with the medium into it, and to add another layer of meaning. But at other times, it was distracting, and made things too "on the nose."

I do hope others experiment with this style, though!
Posted by Jesse at 2:12 PM