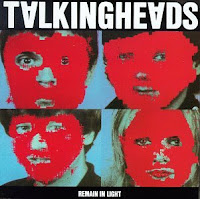 This is not a new album for me. It was the first Talking Heads album I bought, probably in 1986. But, I listened to it today, so I thought I would mention it. It was the fourth of their eight albums, and is best known for the song Once in a Lifetime, which is probably most well known because of its video.

But in my mind, the gem of the album is spoken word piece, "Seen And Not Seen." There was an artsy girl that I was always trying to impress in high school. She hated the Talking Heads, and always made fun of me because I liked their albums. One day I wrote out the words to Seen and Not Seen and gave them to her, not telling her where they were from. She came to me later and said, with some intensity, "Whoever wrote that is a genius."

SEEN AND NOT SEEN
He would see faces in movies, on T.V., in magazines, and in books..... He thought that some of these faces might be right for him..... And through the years, by keeping an ideal facial structure fixed in his mind..... Or somewhere in the back of his mind..... That he might, by force of will, cause his face to approach those of his ideal.... The change would be very subtle.... It might take ten years or so..... Gradually his face would change its shape..... A more hooked nose... Wider, thinner lips..... Beady eyes..... A larger forehead.

He imagined that this was an ability he shared with most other people..... They had also molded their faces according to some ideal..... Maybe they imagined that their new face would better suit their personality..... Or maybe they imagined that their personality would be forced to change to fit the new appearance..... This is why first impressions are often correct..... Although some people might have made mistakes..... They may have arrived at an appearance that bears no relationship to them..... They may have picked an ideal appearance based on some childish whim, or momentary impulse..... Some may have gotten half-way there, and then changed their minds.

He wonders if he too might have made a similar mistake.
Posted by Jesse at 11:26 AM