The Best of Patience and Prudence 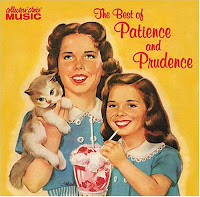 So, I found this album the way many people did, I think: Dan Clowes' Ghost World. The part of the story with "A Smile and a Ribbon" is so sweet and touching that it made me wonder if it was a real song. Some web searching cleared that up, and it made me wonder about Patience and Prudence, so I ordered the album. And it's funny -- the first two songs "Tonight You Belong to Me" and "Smile and a Ribbon" really stand out as special -- and all the others (about 18 of them) don't seem special at all. But the liner notes make clear why. Patience and Prudence (real names) were 10 and 13 when their mom suggested to their music industry father that they record those two songs to give as presents for relatives. They learned "Tonight" at camp, and had been singing it a lot, and their Dad had helped write "Smile and a Ribbon". Ross Bagdesarian (Dave of Chipmunks fame) happened to hear it, and his wife shared it with the head of a record label, and they decided to record it as a single. While the family went on vacation, it suddenly became a hit (#6 on the charts)! Soon, they recorded the other songs, but honestly, all of them feel lifeless -- none of them have the sweet fun of "Tonight you Belong to Me", and nothing comes close to the weird, sad feeling of A Smile and a Ribbon, which would be a kind of sweet song, except that it doesn't really feel like Prudence (age 10) believes what she is saying, which gives it a feeling of sad hopelessness when she sings:

And it is this sense of denial that made it such a perfect fit for Ghost World... I would love to hear the story of how Dan Clowes picked it.

Oh! As to what happened to Patience and Prudence? Their parents were very careful not to exploit them, and when the other songs didn't take off, they just didn't make any more. They are both still alive at the time I write this, living happy non-show-biz lives.