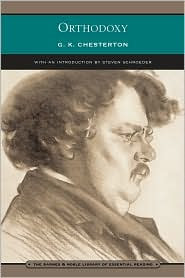 I've heard quotes from G.K. Chesterton all my life ("A room without books is like a body without a soul", "If a thing is worth doing, it's worth doing badly", etc.) but this is the first of his books that I've ever read. I got to thinking about him because I was reading a biography of Marshall McLuhan (not finished yet!), and hearing Chesterton speak apparently helped McLuhan find his faith. Similarly, Chesterton comes up several times in C.S. Lewis's famous work, Mere Christianity. I'm not sure why I chose Orthodoxy, with is a sequel to his earlier Heretics, but it is a fine book that stands on its own.

It is rare to find someone with faith who can write about it in such a thoughtful, logical, and engaging fashion. Chesterton's writing is absolutely fearless: he makes a controversial statement on almost every page. His use of humor, irony, and sarcasm is constant -- so constant that it can be hard to tell when he is serious. Ultimately, Chesterton's argument for Christian faith is mostly that it feels right, and it is good for you. And really, when talking about faith, what more argument can be made?

His pathos was natural, almost casual. The Stoics, ancient and modern, were proud of concealing their tears. He never concealed His tears; He showed them plainly on His open face at any daily sight, such as the far sight of His native city. Yet He concealed something. Solemn supermen and imperial diplomatists are proud of restraining their anger. He never restrained His anger. He flung furniture down the front steps of the Temple, and asked men how they expected to escape the damnation of Hell. Yet He restrained something. I say it with reverence; there was in that shattering personality a thread that must be called shyness. There was something that He hid from all men when He went up a mountain to pray. There was something that He covered constantly by abrupt silence or impetuous isolation. There was some one thing that was too great for God to show us when He walked upon our earth; and I have sometimes fancied that it was His mirth.