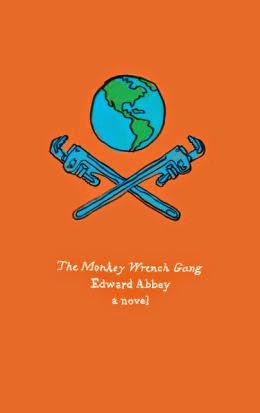 I found this in an airport bookstore and picked it up for reasons unknown. I had never heard of it, or Edward Abbey. I was intrigued by the quote on the back: "Somewhere in the depths of solitude, beyond wilderness and freedom, lay the trap of madness." As I started reading, I was somewhat captivated. It is about some relatively ordinary citizens who form a conspiracy to halt civilization. I loved the book for a number of reasons:
1) The protagonists are mostly fairly ordinary people, who are just fed up, and taking simple destructive action. The idea that most of us are just one day away from being anarchists is intriguing.
2) Nothing in the story is cut and dried. While it is easy to sympathize with wanting to slow down over-construction, the way they go about it seems like a terrible idea... and yet, it doesn't seem like a bad idea either. It would've been easy for Abbey (given this was written in 1975) to make our destructive friends into heroes, and their opponents into villains, but it isn't exactly that way. He lets us sympathize with both sides of the situation, which makes the whole thing deeper and more thoughtful.
3) Details! Good Lord! I've never known so much about bulldozers, or trains, or explosives, or canyons. I can only wonder how Abbey acquired so much knowledge about these things, but, wow, there is a lot of it there. I can see how this book must have inspired a lot of real life vandalism -- he lays so much out very plain... though at the same time, is clearly not advocating it.

Now... funny thing... the quote on the back cover. When I ran into it in the book, I was surprised to learn it was different in the text! In the text, the word is "wildness," not "wilderness." So... where is the typo? When I search the phrase on google, there are more matches for "wilderness" than "wildness"... but, I feel certain that Abbey must have said "wildness." It just makes more sense. But since the book is, on the surface, about wilderness, I think people just get it wrong. Everyone likes wilderness, but we are squeamish about wildness. "Wildestness" should be a word.

So, I loved this book, I enjoyed it through and through, and I can easily imagine reading again in future. But I see in the frontispiece a long list of other books by Abbey! I wonder which one I'll read next?

Side note: Why don't I write in this blog more often? Lately, I go long periods without writing, though I finish books and movies and such by the dozens. I guess it's just really hard to carve out time when I can feel good about writing. I don't much like to just splat down words, I like to think about what I'm saying and why, at least a little bit. And it is hard to justify not doing other things just so I can make time for this. I'm not sure. But I do like writing for its own sake, and I will keep trying to find ways to write here more regularly.
Posted by Jesse at 10:44 PM