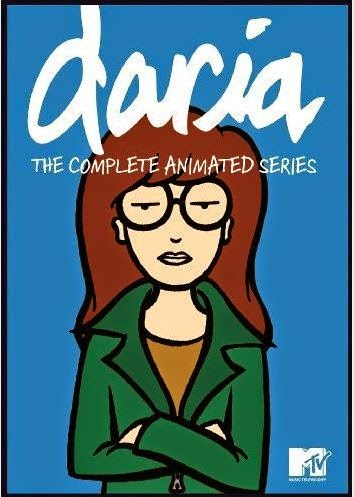 I watched Daria a bit back in the 90's, like everyone else, and thought it was pretty cool. But, binge watching through the whole series as family entertainment is something else again. I was amazed at how solid a show it really is. It's not an easy thing to make a sitcom with no laugh track that has an antisocial bookworm as the protagonist. It's not at all like Big Bang Theory, where Leonard is really fairly normal, and is surrounded by misfits. In Daria, everyone is a caricature, and everyone is a misfit. And Daria is an unlikely bridge to the audience, but she is part of what makes the show so great. I think very few people can fully empathize with Daria, but everyone can empathize with her impatience with lies and hypocrisy, and everyone can appreciate her sharp sarcasm. Weirdly, the more I think about it, her best friend Jane Lane is actually more accessible than she is... which is a really unusual device for television... or is it? As I contemplate it, I realize that this makes Daria like Sherlock Holmes, and Jane like Watson... which leads to the question of who is really the protagonist? Is it Holmes, or Watson? Anyway, all that aside, this is a truly well-crafted show. Five seasons, including two movies, with excellent character development, and investigation of sides of high school often ignored. I also love how it doesn't really paint anyone as good or evil -- something it shares in common with Freaks and Geeks.

It's weird to think about how this show came about. Daria was a Mike Judge character on Beavis and Butthead, who somehow got spun out into her own show that had nothing at all to do with Mike Judge. But somehow, one gets the feeling it was for the best, that he would not have allowed it to become what it is. It freaks me out a little how much this show affected me, as we watched it through. I find myself reading more, and that I'm less impatient with dry books. Also, it got me thinking about a high school friend who Jane Lane always reminded me of, and I was able to meet up with her and learn about her last twenty years of art doings.

Oh! I need to comment on the voice acting. It is all SO GOOD! How did they cast Tracy Grandstaff, the voice of Daria? She seems to have been a production assistant at MTV, and never seems to have acted again. Many of the other voice actors seem to have similarly short careers. Even the ones who are well known are somehow not *that* well known... I don't quite know how this happened, but the fact that the voices are mostly unknowns just strengthens the show, somehow.

Anyway, I don't have much more to say about Daria other than I think it is excellent, that it seems to do a really good job with female characters, and that I hope Daria and Jane can be friends forever. It's probably late for a Daria reunion... but... I would totally watch that.
Posted by Jesse at 10:47 PM