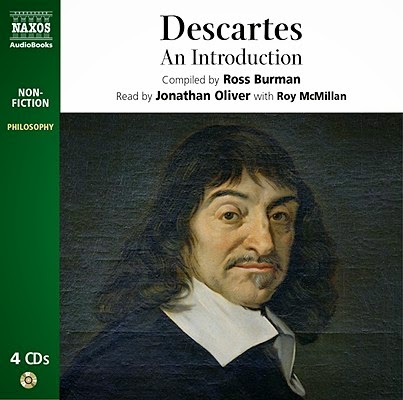 I always like reading philosophy, and I'd never read straight up Descartes before, so I thought I'd go for it with this interesting audiobook, assembled by Ross Burman. It contains readings of Descartes' six mediations, as well as his Principles of Philosophy. It was quite interesting to see how the Principles of Philosophy are, in a sense, better written versions of the Meditations. It makes me feel better about my own work, given that certain chapters of The Art of Game Design are better (I hope) written versions of earlier essays I'd published here and there.

Generally, I have to admit, I did not gain much insight from reading Descartes. Most of it is either well known (cogito ergo sum) or, well, kind of ridiculous. The idea that God must exist because:
1) The idea of perfection could not come from imperfect beings
2) God is perfect
3) Man is not perfect
4) Man possesses the idea of a perfect God
5) Therefore, the only way man could possess the idea of a perfect God is if it were given by a perfect God
... is well, kind of ridiculous. But the validity of Descartes' arguments isn't the point. The point is his bold and logical approach. Armed with nothing more than logic, he attacks the hardest questions we know. In some ways this is no different than Plato, but with a new level of formality. We give Plato a bit of a pass when his arguments are wooly... but we hold Descartes to greater scrutiny, because his formal logic demands greater scrutiny. Descartes' gift to us is not the arguments, but the frame that holds them. It is ironic, I suppose, that this very frame destroys most of his arguments, but that only proves the value of the frame.

The audiobook has two narrators -- Johnathan Oliver, who is the voice of Descartes, and Roy McMillan, who gives commentary and introduction to each section. McMillan can sometimes sound a bit like "The Book" in the The Hitchhiker's Guide to the Galaxy, which makes some passages especially amusing. (It is pretty clear to me that Douglas Adams must have done some reading of Descartes.) Here is my favorite passage, which seems almost straight out of Hitchhikers:


There are, however, criticisms of the ontological argument. I may be able to have the idea of a perfect cheese sandwich, but it does not necessarily follow that such a sandwich exists. Existence is not a property. By giving the property of existence to God, we presuppose that God exists. But, anyway, rather like Descartes, I digress.