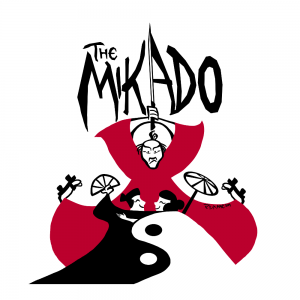 When I was young, I became quite obsessed with Gilbert and Sullivan. It came via my father, I think, who took us to see the (surprisingly excellent) performances at the local college. He also had recordings of the big three, Pinafore, Mikado, and Pirates, with lyric sheets, and an interesting annotated book that contained text from all the plays. The summer after sixth grade, I remember, I worked every day to learn the complete lyrics of the Major General song, and I worked away with a dictionary to learn what every word of it meant. But somehow, the Mikado ended up being my favorite. I think most of all, I liked the irony of it -- the layers and layers of irony. The whole premise of it is that everyone is so serious they cannot see how ridiculous they are. And perhaps that is the message of the play? Ofttimes the reason for a huge amount of seriousness is to cover up how ridiculous a thing is, perhaps? Everyone in it knows they are a character, going through the motions, but it is all they have, so it is what they do. Anyway, it is certainly my favorite of the plays. It keeps moving, and every song is a delight. So, when the Pittsburgh Savoyards (yes, that's a thing, now in their 77th season) offered a performance just minutes from my house, it was hard to stay away.

And they had a lot of fun with it! They always have a mix of players, some more and some less professional, but this cast had a some wonderful performances and singers. The overall choreography was a little clownish for my taste (again, I like irony of the show, which I think comes through more strongly with more serious choreography and blocking), but it was all very pleasing, and wonderful fun. The songs, the rhymes, the logic puzzles, the wistfulness, the decapitation jokes, the second trombone, I think I will never tire of this show. I think these four lines sum it up best...


To sit in solemn silence in a dull, dark dock,

In a pestilential prison, with a life-long lock,

Awaiting the sensation of a short, sharp shock,

From a cheap and chippy chopper on a big black block!