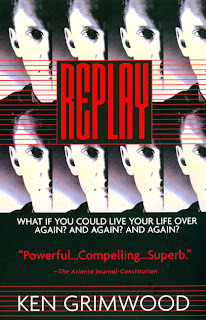 I love time travel stories, and this unusual one was suggested to me by Kyle Gabler. It's got a very unusual premise -- kind of a Groundhog Day that takes the entirety of your life. I had mixed feelings on the book, though -- it had some great thinking in it, and it occasionally rises to some meaningful philosophical questions, but at the same time, I felt like it had a lot of filler -- long story arcs that didn't really mean much, or go anywhere. And if there is one that that drives me COMPLETELY CRAZY, it is when people in paranormal stories don't think through their situations. There are times when the characters had 10 or 20 years to prepare for a certain event, and when it happened, they were like, "Doh! It didn't occur to me that *this* would happen!" Which was irksome to me because I only had 30 minutes to think about it, and I saw it coming, because it was pretty obvious.

In short, this was one of the rare times I was sorry it was an audiobook, because I would have been doing a lot of skimming. And yet -- I have to admit it made me think.

Weirdly, the audiobook has the same narrator as Anathem. He must really like long books about parallel universes.
Posted by Jesse at 1:31 PM