The Left Hand of Darkness 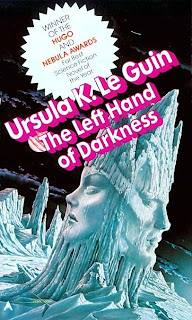 This was a recent SNIB (Schell Games Non-Intellectual Book Club) reading, and I really enjoyed it. I found it hard to get into at first, partly because of all the weird vocabulary. But once I was in, I found it very compelling. Previously, I had only read Le Guin's lesser books (she's written A LOT of books, some of them are going to be lesser), and I always wondered why she was held in such high esteem. Now I know! This is a story set on a world in perpetual winter, about a people who are mostly androgynous. I say mostly, because at mating time (about once a month) they suddenly take on male or female characteristics at random. It is possible for one of these individuals to be both mother and father of different children, at different times in their life, in other words. The book ends up being a subtle exploration of the relationship between gender and identity. And the parallel to the ice world is hard to ignore -- almost as if the sexuality of these people are buried under ice, only emerging for brief periods of thaw.

Taking that metaphor even further, the book itself feels kind of like it is made of ice. On the surface, it is a hard, slow story, but something hidden burns within. I have to imagine even the author doesn't know all the mysteries that reside here. It very much has the feel of a book written by the subconscious. And though it is mysterious, it is very consistent -- Le Guin creates an incredibly solid world. When it was over, it was hard for me to imagine that "kemmer", "shifgrethor", and other concepts were just part of this story -- the world became real, and I didn't want to let it go.
Posted by Jesse at 6:10 PM