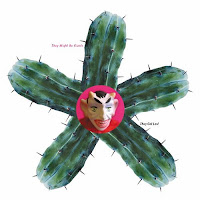 I hadn't listened to this TMBG album in a long time -- Not sure what made me bring it out. It has lots of great songs -- weirdly, though, the "slow version" of the title song is what's on here, not the fast version, which I prefer. It's not so much an issue of the rhythm, but rather of a key lyric. In the original fast song, it goes:


John said to John
I think we make a left at the light
There should be a big crinkle
Assuming this map is right
John leaned over and said
Hey no, it's not
That's just a crumpled up wrapper
From the fast food that we got

In the slow version, somehow the "big crinkle" becomes a "big B", which doesn't seem nearly as clever to me, a la Korzybski, the map is not the territory, etc. I just love the multiple layers of error: Lost from a misread map... the misreading is a confusion of the fabric of the map and the content of the map... and further, it's not a map at all.

One of my other faves on here is Certain People I Could Name ... here's an excerpt:


The few surviving samurai survey the battlefield
Count the arms, the legs, the heads, and then divide by five
Drenched in blood, they move across the scene
Do I have to point or do you see the one I mean?
The one in back, the way he acts
is he reminding you of anyone we know?
Isn't he so like certain people I could name?