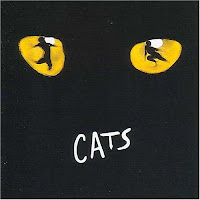 I had never seen Cats before. I'd heard the music here and there, and often run into rabid fans of the show, but I'd never seen it. We picked up tickets, because I thought my daughter would enjoy it -- and she did. I was kind of shocked at the structure of the show -- I cannot recall ever having seen something similar. It's basically just a musical revue, but with the very thinnest veneer of story over it. It's a show where 95% of the time is spent introducing the characters, and 5% is spent telling the story. I'm reminded of a story I heard of Andrew Lloyd Webber pitching the show to someone. Halfway through the pitch, which involved the playing of songs at the piano, the person he was pitching to interrupted, "I'm sorry, Andrew, I'm not quite getting this -- what exactly do these cats represent? What is this show about?" Webber replied, "No, no, you don't understand -- it's just about cats."

And I think that is the magic of this show. Cat lovers quietly impart all kinds of secret inner thoughts and lives to their cats, but that's an embarrassing thing to talk about. It's probably not even entirely conscious. And to suddenly be confronted with a broadway show where the secret lives of dozens of familar cat personalities are sung about, danced about, and celebrated majestically must be an overwhelmingly joyous and cathartic experience. Top that off with the fact that old ladies are the greatest lovers of cats, and the most likely to attend broadway shows, and the little plot there is concerns the fact that each year, one cat is chosen to be born again into a kitten, and on top of that, the most touching songs in the show are old cats singing songs of their youth, and well -- it's no wonder this is one of the most successful shows of all time.

I know people deride the show as trite and corny, but as a piece of entertainment crafted for a specific audience, it is a masterpiece. I knew "Memories" was a tearjerker, but I'd never heard the song that Gus the Theater Cat sings -- as a washed up performer myself, I found it to be very touching. I hope that one day, I can create something as simple, powerful, and enduring as this fluffy show.
Posted by Jesse at 10:23 PM