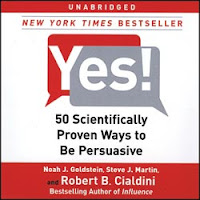 I actually read this a little while ago, and somehow forgot to mention it. It was a pleasant survey of research on the nature of persuasion, with fifty short chapters, each describing the results of a different study. Since it's been a few months since I read it, I have the luxury of telling you what in it stuck with me:

2) Small favors lead to big favors. If someone asks you for a small favor (can you tell me the time?) and then later asks for a large favor (can I have a dollar?) you are more likely to grant the large favor than if the person skipped the small favor first. This appears to be because of a certain kind of rationalizing we do -- "I did a small favor for this person, therefore they must be of some importance to me."

3) There are a lot of Dentists named Dennis. In some creepy data mining, it was determined that one's name exerts some amount of influence on the job that one chooses. Roofers are more likely to have names beginning with "R"., etc. This is just the tip of the iceberg when it comes to how egocentric we are. An experiment with persuasive sales letters showed that if the persuader had the same birthdate as the persuadee, the persuadee was more likely to respond positively to the letter.

Wow -- look at all the stuff I remembered! I guess that's a good sign.

In short, it is an excellent book for getting a survey of the psychology of persusasion. It feels too much of a need to end each chapter with a painfully corny joke, but if you can overlook that, it's pretty good.
Posted by Jesse at 7:11 PM