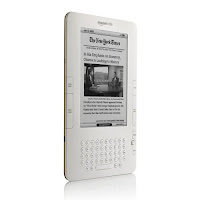 I've had this for some time, but had put it away for a while, preferring to read my kindle books on the Ipod Touch. I got to thinking about it again, and started making more use of my Kindle. For a while, the ugly flash upon page turning really bugged me -- I would close my eyes when it happened. Gradually, gradually, I got used to it. I'm trying out the New York Times subscription on it. To sit in a Starbucks and read the NYT on a Kindle makes me feel smart and sophisticated. It is a very nice way to read a newspaper -- superior to print, because it is easier to scan, and easier to know when you've seen it all, and much less wasteful.

I do wish that the display had more contrast -- it looks a lot like damp newspaper, and without bright light, is a bit of a challenge. But -- I like it a lot, and I wonder what meaningful improvements in ebooks will come next. I really do believe that they are the future of newspapers, and probably of books. The more I use the Kindle, the more clunky books and newspapers seem.
Posted by Jesse at 10:48 PM