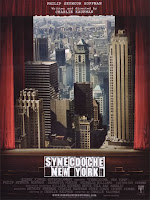 I've been a fan of Charlie Kaufman since I first saw the surreal Being John Malkovich. And earlier this year I saw Adaptation, which I liked a great deal. Synecdoche is the first film he has directed, and wow -- unfiltered Charlie Kaufman is a pretty crazy, intense thing. The premise is that a stage director having a mid-life crisis gets a MacArthur Genius Grant, and uses it to create a play that is a reconstruction of his life in a huge warehouse. The catch is, though, that the play is part of his life, so it too must be reconstructed within the play. And, well, it gets more and more complex from there. It is not a friendly film -- it makes you work to keep up with what is going on. It's message, like the message of almost all mid-life crisis movies, appears to be the Christian message -- the only escape from despair is to help others. At times it was a little too arty for me, but aspects of it were very haunting, and will stay with me for some time. It certainly forced me to confront the relationship between art and artist, and I feel like it gave me some keys to that conundrum that I haven't figured out how to use yet.

More and more I wonder about art and creativity. I used to think that creating a thing for a specific audience was the best and wisest method -- but as I grow older I see more and more that creating a thing for an audience can spoil a thing, and riddle it with compromises, that ultimately make the audience turn away from it. More and more, it becomes clear that the best path is to let a thing you create be true to itself, and to focus on nothing but that. Now, sometimes, part of that involves visualization of the audience interacting with it, or observation of the audience interacting with it -- but that *only* helps in the weird context of helping the created thing be true to itself. This is very hard for me to talk about -- but more and more I think it is the only important part of any creativity. I hope I can find ways to talk about this more clearly.