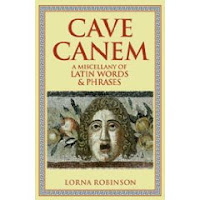 So, I took three years of Latin in high school, with grades that descended each year, because I didn't work very hard, and so things never really stuck. I've always been sad about that, because I had grand visions of sitting down to read, say, the Aeneid. It was with delight, then, that I discovered the Dowling Method of learning Latin, which is based on slow, steady, and thorough drill, with the goal of being able to read Latin smoothly and naturally. At this moment, I am 170 pages into my drill book of 200 pages of nouns, and when I finish that, I'll begin adjectives, and then verbs.

Now -- none of that has anything to do with Cave Canem, except that I bought this book as a way of breaking the intense monotony that is the Dowling Method. The book is alright, it has little windows into Roman history via common Latin phrases, but I wish that it paid a little more attention to grammar -- it frequently presents accusative or ablative forms of nouns, with no explanation that that is the case (no pun intended, and I'm sure, none taken). Some of the translation and explanations I found a little suspect, too. But, I found it a great way to pick up a little more knowledge and vocabulary. I am very likely going to put "Non scholae sed vitae discimus" over my door.
Posted by Jesse at 1:22 AM