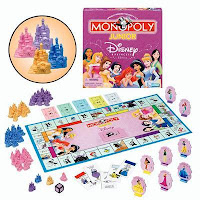 I am always so impressed by the design of Monopoly Junior. It could have been done so badly, but it is such an elegant streamlining of the original game, it so perfectly captures the essence of Monopoly, that in a sense it is more Monopoly than Monopoly -- like Monopoly consomme. It's a wonderful game to play with kids, because there are virtually no decisions to make, which means that when someone suffers in the game, no one has to feel guilty. The Disney Princess edition is silly, but that's part of the fun of these Monopoly editions -- they invite the imagining of silly scenarios... Jasmine saying, "Hey, Ariel! Get off my flying carpet!" Or the evil Ursula cackling, "Now your money will go under the sea, with me!"

Our edition is not as nice as the one in the picture -- everything in it is made of paper and cardboard -- it would not be possible to make it more cheaply! But somehow, that fragile quality makes it feel almost homemade, and more fun.
Posted by Jesse at 1:33 AM