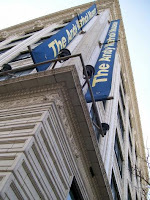 Somehow, I had lived in Pittsburgh for seven years and had never been here. I was surprised at how ordinary the museum layout is -- but the whole thing really gives some insight into Andy Warhol, and even more insight into the people who consider him an important visionary. What's weird to me is the number of people there who seemed so phony -- which seems ironic, because so much of what he did was about things that were phony... so, maybe it isn't ironic at all, but rather, just what he would want? I guess that's what made him so special -- a guy who was artificial, through and through is what it took to make the art world question the difference between the natural and the artificial.

My favorite story about the museum: A neighbor of ours home schools her ten year old boy. She gets the idea one day, "Hey, how would you like to go to the Warhol?" He is immediately enthusiastic: "Yeah! Let's go!" They get there, and he seems puzzled, but he is patient. Finally, after forty-five minutes of looking at weird pictures, he says, "Mom, I don't get it -- where are the guns and stuff?" She says, "What are you talking about?" He says, "You told me we were going to the War Hall!"
Posted by Jesse at 6:23 PM