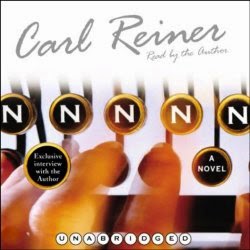 I've always liked Carl Reiner. Who doesn't? I got to know him as Alan Brady, and learning that he was the real writer of the Dick Van Dyke show, in other words, the real Dick Van Dyke, playing his own boss, well, always made him kind of a surreal and awesome figure. And, well, the 2000 year old man. And the way he and Mel Brooks hang out every day.  And he broke me up on TV once when I was a kid, on the Dinah Shore show, or something like it, with his impersonation of the radio singer who couldn't make it on TV because of the weird faces he made when he sang. And he's Rob Reiner's dad! Anyway, I was intrigued to find this peculiarly titled novel read by the author. Turns out, well, I can't say it's a great novel. It's kind of goofy and stupid, really, and didn't enjoy a lot of editing. It centers around a novelist who talks to himself, who is writing a new telling of Genesis. In the interview at the end, Reiner admits he started trying to write Genesis himself, found it was hard, and instead started writing this story around that. He also admits he didn't plot it much, he mostly let the novel unfold, and that kind of shows, too, as some storylines just kind of go dead. The strongest parts for me were the internal (or, not so internal) monologues of the protagonist, but at the story resolves itself, those gradually disappear.

But judging this as a novel is probably wrong. Better to judge it as a visit from a friend. Having Carl Reiner come by and read this silly story aloud was tremendous fun, and it made me feel closer to him, like I know him a little better. He's 93 now, and wrote this when he was 84. I hope I can be creating such silly, fun things when I'm 84!
Posted by Jesse at 9:49 PM