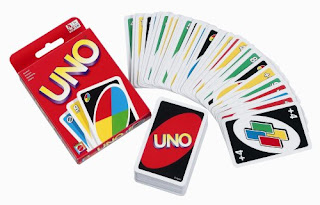 Yeah, baby! It's Uno! Everyone loves Uno, right? The magic of Uno is hard to describe. I guess some of it is about the choice of who to harm, and some of it is is about the seemingly meaningless choice of which card to play, but the key part is having to say "Uno" when you have one card left -- building suspense in a weird way that I haven't seen in any other game.

I always love the story about how Merle Robbins created the game. The wikipedia article says he sold the 5000 decks he printed out of his Barber Shop, but that's just not possible, right? My understanding is he filled a van with them, and toured around to nursing homes and senior centers, demoing the game, and selling the decks, with a hook of, "Here's a game that you can play with your grandkids." Anyway, no publishers were interested when he started out, but after he'd sold 5000 decks on his own, he was able to get the attention of a publisher, and, well, the game's done alright.
Posted by Jesse at 1:23 PM