Queen of the Sciences: A History of Mathematics 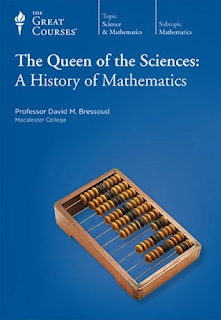 I like mathematics. I always have. The history of mathematics has always been especially interesting to me, because you get to witness so many moments of discovery happening, and they are always so human... they give me the feeling that I could easily discover important things as well. I first got a taste of the history of mathematics when I was growing up -- my Grandpa Emil, a professional (Hungarian) mathematician would often tell me stories of mathematical discoveries. I remember him telling me with particular excitement, the story of how Hardy discovered Ramanujan, and how they worked together. Emil's phone line number was 7129, which was just a transposition away from 1729, the number of Hardy's cab in the famous story. In college at Rensselaer, I would often dreamily stare at the four semester "History of Mathematics" courses listed in the catalog, but they never seemed to fit my schedule. Instead, I read E.T. Bell's Men of Mathematics, which eventually inspired me to record this song with help from Katelyn Mueller.
So! I was quite excited to finally live out my academi-histori-mathematical fantasy by watching this 24 part lecture series given ably by David Bressoud. It's a bit dry at times, and could use more diagrams, but still, it's pretty great! He uses Fermat's Last Theorem as a sort of thread running through the entire history of mathematics, and tells many wonderful stories. Early stories about the importance of astronomy and astrology to mathematics, and later ones about how radio waves were discovered. I really found it thoroughly enjoyable, and I was sad when it was over. I learned a lot, and gained new appreciation for elliptical functions and the complex plane. I also really enjoyed his definitions, most especially mathematics as "the abstraction of pattern." Studying math makes me feel connected to my heritage, and makes me feel like Emil is right nearby, in the light blue armchair by the fireplace, puffing away at his Revelation pipe tobacco (same one Einstein smoked!) while I pore over his books about Escher and topology.
Posted by Jesse at 12:10 AM