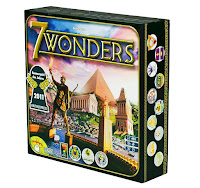 I'm not always a fan of points-building euro games... But I really like this one! Lots of fun choices, very little head-to-head competition, and relatively simple mechanics. Things I especially liked:

In short, it is rich, and while it has some level of inherent complexity (military actions, scientific development, industry, building wonders) it all happens by playing simple cards, and so the complexity is wide, not deep, allowing for a lot of emergent gameplay because there are a lot of verbs, but the verbs are each simple and of the same form. I look forward to trying it again. No wonder this has so many awards -- it is very interesting and steamlined.
Posted by Jesse at 11:25 PM