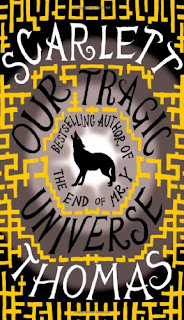 I haven't made a post for a while. Not because I haven't been finishing things (I have a big stack here of things that I hope to write about sometime) but because I haven't felt like it. It takes a kind of mental energy to do this kind of simple reflection that I don't always have available. But, this book, by Scarlett Thomas, broke that dam for me. Not only for this blog, but with some of my other writing projects, as well. Maybe because partly it is a book about writer's block. I'm not sure. I do know that this book spoke to me, though, in a deep, fundamental way.

One one level, it is a story about a writer, and her writer friends, and their broken relationships. Not crazy-dramatic broken relationships, crashing like sports cars into glass skyscrapers, but everyday broken relationships, rusting like broken down cars on the front lawn. But, these writers talk.... a lot. And they spend a lot of time philosophizing about the true nature of story, and the true nature of life and the universe, and how these might or might not be connected -- and I found that quite delightful. The story gets quite meta (you find yourself reading a book about a writer who is having trouble writing a book about a writer who is having writing a book), and then of course, since the book is a debate about the structural relationship between life and stories, and of course you know perfectly well that the lives of the people you are reading about are actually stories, from a book with blurbs on the cover, it gives Thomas the ability to play games with the reader that most books could not play, as she stretches reality to its breaking points. In some sense, this is not a novel at all, but really a philosophical discussion disguised as a novel... and of course, the characters comment on that, as well.

Reading it made me feel super smart, because it touches on so many interesting philosophical concepts that were new to me, and now I can name-drop ideas from Aristophanes, Baurdrillard, Tolstoy, Chekov, and Tipler, and sound like I know what I'm talking about. By a weird coincidence, I was in the UK most of the time I was reading it, and it takes place there.

I devoured the book -- mostly reading it on a couple of long plane rides. And that is unusual for me... I typically get a kind of reading fatigue, where I need to take breaks between chapters. The clear, simple imagery of this book, and the sparkling ideas made it hard for me to put down. I *had* to know how it was going to end... not so much that I cared about the character relationships, but I knew the ending, in itself, would be a philosophical statement about the nature of story, and of the universe. I hoped beyond hope for a clever rabbit to be pulled out of a hat at the end. I did not get that rabbit, and was at first, disappointed. Instead I got something more like a stone dropped into a pond... and the magic part is that somehow, that seemed like a magic trick in itself. The magic of making the ordinary seem like magic is a new idea for me -- and I find its ripples reverberating with me yet.

Without a doubt, Scarlett Thomas just got added to my fantasy dinner guest list!
Posted by Jesse at 7:30 AM