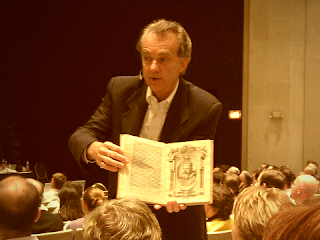 I went to this because for years I've meant to read the Tufte books, but whenever I try, I find them a bit dry, and just kind of pick around. I thought maybe if I attended his day-long lecture, it might give me more of a handle to the books. And in fact, all attendees get all four copies of his book, in a box with a handle, which seems a good omen!

The lecture was a full house, with maybe 200-300 attendees. I worried at the beginning -- he did not warm up to us, but initially seemed kind of cold and distant. But, as time went on, he started addressing us a bit more warmly. I had been warned that he was a man of stong opinions, and that was certainly true -- but strong opinions make for good lectures, because they make the audience think.

I'm a book nerd, so the coolest parts for me were when he would bring out these ancient tomes (first edition of Euclid's elements, etc.) and bring them around to show us how text and imagery were much more wisely combined in the past.

The key points I took away:
Anyway, I definitely recommend attending the Tufte lecture, if you get a chance. I still haven't read all the books, but I feel like I have a much better handle into them -- hopefully I'll find time to read them soon!
Posted by Jesse at 10:46 AM